In the grand old debate on what Goofy was (man or dog?) and what Gonzo was (bird or insect?), when I was a kid I wondered what Grimace was (must be something with the letter "G" that makes things ambiguous). 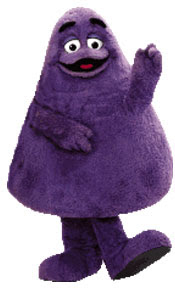 Those of us ol' timers remember when McDonalds had McDonaldland. McDonaldland was McDonald's marketing tool which began in 1971. The fantasy world was inhabited by Ronald McDonald and his cast of supporting characters (Officer Big Mac, Hamburglar, The Fry Kids, Mayor McCheese, Birdie the Early Bird, to name but a few). Most of these characters traits were easily correlated to who they were: Ronald was a clown, Officer Big Mac and Mayor McCheese were a hamburger and cheeseburger respectively, Hamburglar was a guy who steals hamburgers.

But what was Grimace? He was a big purple, blobby thing with big round eyes and bushy eyebrows. He originally began as a bad guy who stole milkshakes, but by 1972 he was changed into a good guy and his appearance was made less menacing.

McDonald's described Grimace as such: "He is a big fuzzy purple fellow and Ronald's special pal."  Thanks McDonalds for making things as clear as mud.